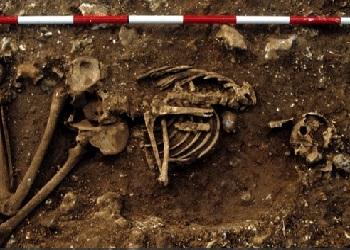 A burial discovered in 1989 near Westbourne, West Sussex has been the subject of recent investigation by a team of specialist from around the UK in collaboration with The Novium Museum.

The crouched burial was discovered as a result of a metal detector find in 1989, when a dagger blade and a number of rivets were discovered. A scheduled excavation then revealed a complete burial with a number of additional rivets. The individual - of robust and athletic build - had been buried with a dagger sometime in the Bronze Age.

Funding of almost £2000 from the South Downs National Park Authorities Sustainable Communities Fund was secured in February 2014 and a team of specialists was put together. The funding has enabled thorough investigation of the archive including Radio-carbon dating and Isotope analysis and osteological assessment (to tell us whether the person had ever suffered illness or injury during his life) of the human remains, and X-ray Fluorescence (XRF) of the dagger to ascertain the dominant metal, and establish whether it comprises copper or bronze. The results are fascinating.

Radiocarbon dating of the remains was undertaken by the Scottish Universities Environmental Research Centre in Glasgow and suggests that he died sometimes in the period 2300BC - 2150BC. Isotope analysis undertaken on one of the Racton Man's teeth by experts from Durham University reveal that he could have been brought up in southern Britain - possibly somewhere to the west of Sussex.

Analysis of his bones suggests that he was 6ft tall and that he displays signs of spinal degeneration, which is thought to be age related. They also found that he suffered from a chronic sinus infection, as well as an abscess and tooth decay. Evidence has also been found of a peri-mortem cut - at or near the time of death - to the right upper arm bone, close to the elbow. There is no sign that this had healed. This is consistent with the arm being raised, elbow bent above the head, to protect it from a blow or strike from a weapon. These indications of actual fighting suggest that Racton Man's dagger was not just for display. His social position may have depended on him demonstrating his prowess in combat.

Although less certain, there is also evidence of a similar blow having struck the lower part of the right shoulder, under the armpit. A sharp force blow to this area of the body would have been consistent with a double strike - one to the head, blocked by the raised right arm, and a second deep into the armpit, presumably to sever the major blood vessels in this area.

XRF analysis revealed his dagger to have been made from Bronze. This combined with the Radiocarbon dating of the remains and typological analysis of the dagger itself makes it the earliest bronze object to have been found in Britain.

"He would have been a very prominent member of society, someone of great seniority" Dr Stuart Needham, Bronze Age Specialist.