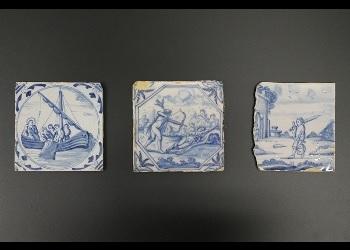 'Delftware' describes all the tin-glazed earthenwares made in the Netherlands and Britain. From the 1600s the most famous was made in Delft in South Holland.

The well-known blue tiles appeared about 1620, inspired by the porcelain imported in huge quantities from China. 'Delft blue' became world famous, so that it became the name for all blue and white earthenware objects and tiles, even if not actually made in Delft. This pottery was given a tin-based glaze that made it white, glossy and easily painted on.

'Delftware' was made in England from about 1550 until the late 18th century, mainly in London, Bristol and Liverpool. It was usually less fine than that made in Holland, and the English works produced a wide range of pottery, including tiles.

As prosperity in Europe increased, tiles became increasingly fashionable and in demand. They were used round chimneypieces, in corridors, on staircases, in kitchens and as lintels.

Tiles were often painted with scenes from daily life (men on horseback, soldiers, people at work, ships, children playing, landscapes) and with scenes from the Bible and from classical mythology. The craftsmen who painted them were not usually great artists, but by transferring the designs onto the tiles with pounces (pricked drawings through with charcoal dust was pounced), copying other tiles, illustrations in books, or engravings by well-known artists was comparatively easy.

The fight between David and the giant Goliath is described in the Hebrew Bible/Old Testament, and briefly in the Qur'an.

The purpose of the original story was to show David's identity as the true king of Israel. Later Jewish traditions stressed Goliath's status as the representative of paganism, in contrast to David, the champion of the God of Israel. In Christian tradition the battle was taken to represent the victory of God's King over the enemies of God's people, as a prefiguring of Jesus' victory over sin on the Cross.

The account of the battle between David and Goliath is told in 1 Samuel, chapter 17. King Saul and the Israelites are facing the Philistines at the Valley of Elah. Twice a day for forty days Goliath, the champion of the Philistines, comes out between the lines and challenges the Israelites to send out a champion of their own to decide the outcome in single combat, but Saul and all the Israelites are afraid. The young shepherd-boy David, bringing food for his elder brothers, hears that Saul has promised to reward any man who defeats Goliath, and accepts the challenge. Saul reluctantly agrees and offers his armour, which David declines, taking only his sling and five stones from a stream.

David and Goliath confront each other, Goliath with his armour and shield, David with his sling. Goliath taunts David, but David replies:

This day the Lord will deliver you into my hand, and I will strike you down; and I will give the dead bodies of the host of the Philistines this day to the birds of the air and to the wild beasts of the earth; that all the earth may know that there is a God in Israel, and that all this assembly may know that God saves not with sword and spear; for the battle is God's, and he will give you into our hand.

David hurls a stone from his sling and hits Goliath on the forehead, Goliath falls to the ground, and David cuts off his head.

This tile was made in England, 1720-60. Many tiles like this, illustrating stories from the Bible, were made in both Holland and England.

Given by Miss Arnold of Harting in 1933.

According to the Gospel of Luke in the Christian Bible, Jesus was preaching near the Sea of Galilee when he saw two boats at the water's edge. Boarding the one belonging to Simon (Peter), and moving out a little from shore, he sat and taught the people from the boat. Afterwards, he said to Peter:

Put out into deep water, and let down the nets for a catch.

Master, we've worked hard all night and haven't caught anything. But because you say so, I will let down the nets.

When they had done so, 'they caught such a large number of fish that their nets began to break', requiring help from another boat. When Peter saw the large catch, which filled both boats almost to sinking point, he fell at Jesus' knees and said, 'Go away from me, Lord; I am a sinful man!' Jesus responded 'Don't be afraid; from now on you will catch men', after which Peter and his partners James and John left everything and followed Jesus.

Given by Miss Arnold of Harting in 1933.

In Roman mythology, Cupid was the god of affection and desire; his Greek counterpart was Eros. Anyone shot by his arrows falls hopelessly in love. Here he is probably shooting Psyche.

When Cupid's mother Venus became jealous of the princess Psyche, who was so beloved by her subjects that they forgot to worship Venus, she ordered Cupid to make Psyche fall in love with the vilest thing in the world. While Cupid was sneaking into her room to shoot Psyche with a golden arrow, he saw how beautiful she was and pricked himself with his own arrow and so fell deeply in love with her.

This tile is Dutch, probably made in Rotterdam, 1740-80. Many tiles like this, illustrating stories from Ovid's Metamorphoses, were made in both Holland and England.

Given by B. Budd of Chichester in 1956, and found locally.