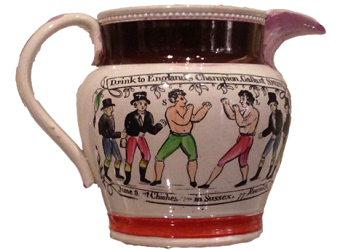 by Lorna Still, volunteer at The Novium Museum

On Tuesday 8th June 1824, in a large triangular field in Birdham, near Chichester, the reigning heavyweight bare-knuckle boxing champion of all England, Tom Spring, faced Irish challenger Jon 'Pat' Langan in a fight that proved to be a turning-point in the history of prize-fighting.

Earlier that year, these two had fought at Worcester, where there were over 30,000 spectators, but the contest had ended in a riot, with around 200 people in the ring. The two men wanted to fight again to restore their reputations and that of the sport itself. The prize would be £500.

Because prize-fights were illegal, the location was fixed only two days beforehand, and rumours of other locations were deliberately circulated to mislead the authorities. Langan himself was deceived by these rumours and went to several other places first. He spent the night before the fight in Chichester at the Dolphin, while Tom Spring, having arrived by coach stayed at the Swan Inn.

Fifty-three large wagons were arranged in a circle round the field for spectators (five shillings a seat) and a grandstand from Epsom Racecourse was erected at one side (one guinea a seat). The ring was 24 feet square and stood six feet above the ground so people could see and also to prevent spectators from entering as they had at Worcester.

On the morning of the fight the excitement in Chichester was palpable. Traffic converged on the city in the early hours, including horse drawn carriages filled with 'swells of the first quality'. Local people stopped what they were doing to watch them, even 'the delicate fair ones [who] were seen peeping from behind their window curtains'.

Tom Spring was born in Herefordshire in 1795 and was actually named Tom Winter. He was a butcher before he took up fighting and, surprisingly, had weak hands. He was nicknamed 'The Light Tapper', but he was fast and light on his feet and developed his Harlequin Step, avoiding a punch while simultaneously delivering one himself. At this time wrestling and throwing was allowed, which gave Spring an advantage, being heavier than Langan.

The first round lasted four minutes, with 'considerable caution observed on both sides', but ended with Langan being 'first down', which settled many a wager. As the fight continued, both men took lots of punishment and Spring's left hand was injured. However, the contest became clearly one-sided and there were shouts of 'Take him [Langan] away', but Langan was determined to fight on - he had, after all, staked £200 on himself! The fight ended after one hour and fifty-five minutes and 77 rounds, with a final gentle punch from Spring rendering Langan 'quite insensible'.

The fight restored Spring's reputation and that of prize-fighting too. The fighters had shown good sportsmanship, the umpires had been fair and the crowd well-behaved. The field was renamed Spring (or Spring's) Field in honour of the victor, and commemorative china was produced. There is a commemorative jug depicting the fight in the Novium Museum's collection.

Spring retired after this fight as his hands were so weakened. He purchased The Castle Inn at Holborn, which became the unofficial headquarters of English boxing. In 1828 the 'Fair Play Club' was formed 'to ensure fair play to combatants' and 'to preserve peace and order in the outer ring' and Spring was its first treasurer. He was generally well-respected and liked for his good manners and kindness outside of the ring. He did, however, make quite a lot of money and was not himself immune from criticism in his dealings. He had been married and had two children, but split up from his wife. She received none of this money, herself dying in a Holborn workhouse.

Spring died on 20th August 1851 and many people attended his funeral. He was buried in West Norwood cemetery as Thomas Winter. A memorial was erected in the cemetery in 1951.