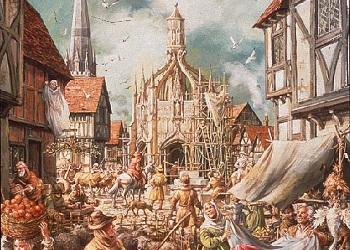 Written by Amanda Harwood, Learning Officer at The Novium Museum.

Over the years, Chichester's Market Cross has become a well recognised feature of the city. It is believed to have been built in 1501 by Bishop Edward Story, who paid ten pounds to the Mayor of Chichester for the ground on which it is built. The Bishop allowed poor peasants, who only had a few eggs or vegetables to sell, to trade without paying a toll provided they could stand under the cross. Bishop Story died in 1503 and left £25 a year in his will for the upkeep of the structure.

The Cross was built on the site of an earlier wooden construction which had been erected by Bishop Rede (1369-1385) close to the original Roman roads. The current Cross is an eight-sided structure made of Caen stone, a popular building material of the time, and has a central column which is supported by eight flying buttresses. Around the base of the column is a low stone seating area with a stone-paved floor. Each side has an arch carved with the Bishop's mitre, or headdress, and bosses of demi-angels.

The cross has suffered damage and seen many alterations throughout its lifetime. In 1642, during the Civil War, major damage was done to the statues that adorned the cross. In 1664 a bronze bust of Charles I was placed in a niche on the Cross. The bust, by Hubert Le Sueur, was presented to the city during the reign of Charles II "in recognition of its role as a monarchist stronghold during the Civil War". The original bust has long since been removed and was replaced with a fibreglass copy in 1978 which can still be seen today. The original is currently loaned to Pallant House Gallery.

Over the years there have been many inscriptions, most of them now faded, dedicated to the people who have helped to shape the cross as we see it today. In 1724, Lady Farrington paid for clocks to be added on three sides of the structure. To mark her gift, the empty niche on the South side was filled with an inscription. The decision to only have three clocks was not popular and so, in 1746, the clocks were removed by Charles 2nd Duke of Richmond and replaced with four new dials.

The Cross ceased to serve its original purpose in 1808, when the increased population of the city meant a more extensive market area was required and a large market house was built in North Street. At this time it was proposed to demolish the Cross as it was considered a nuisance. This was prevented when several local people purchased houses on the north side of the Cross, allowing the widening of the street after their demolition.

In 1808 metal railings were added, closing off the arches, they remained in place until 1872.

The clock currently in-situ was installed in 1904 and is now powered by electricity.

In 1928, the Cross was badly damaged when it was 'rendered' in the name of restoration; this process obscured many of the carvings and led to further repairs in the 1950s and late 1970s.

In July 1950, The Cross was made a grade I listed building and is also a scheduled monument under the Ancient Monument Areas Act 1979.

In 1985 dental plaster casts of a number of the figures that decorate the cross were taken during a further phase of renovations. These plaster casts are preserved in The Novium Museum's collections.