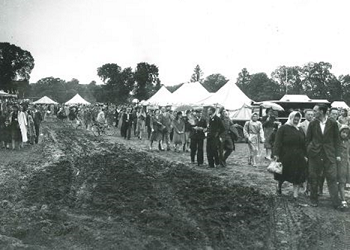 By Pat Saunders, Volunteer at The Novium Museum

About ten acres of the land that forms Oaklands Park was formerly known as 'Penny Acre' and had, up to 1549, belonged to St George's church. It was so-called as it was 'land on which a penny of rent was paid' annually.

In 1939 Chichester City Council acquired the land for £11,000. At this time it comprised of residential buildings, a farmyard and farm land. In the early part of the Second World War a massive water reservoir was built which could be used to provide water to fight fires in the event of a blitz. It had been built to the dimensions of an Olympic sized swimming pool. Hay-making was also a prominent sight in this area throughout the duration of the war.

After the war the park was opened up for sporting use. The first club to be offered facilities at the park was Chichester RFC (previously known as Chichester-Bognor RFC between 1928 - 1934). It was based at the Dolphin & Anchor Hotel with matches played on pitches at Lavant, Chichester Police Station and in Somerstown.

Another club to form and use facilities in the park are the Chichester Bowmen, an archery group, formed in 1954 in response to a letter to the Chichester Observer. The first shoot was held on 19 May 1955.

South of the archery field is the football stadium. The present football club was formed in 2000, as a result of a merger of the Chichester City Team and the Portfield Team. Portfield's pitch was required by the Council for housing. As a result of the merger the facilities at Oaklands were upgraded. The club currently plays in the Southern Combination League Premier Division.

Amongst trees behind the Rugby Club is a purpose built shooting range and clubhouse for the Chichester Rifle and pistol club which was constructed in 2006. The club had originally formed in 1945 after the Home guard were stood down in the last days of the Second World War. The club had previously been located at a site in quarry lane, however this became unsuitable and new facilities were constructed in Oaklands Park.

In the south-east part of the park the Chichester Rackets and Fitness Club has several outdoor courts, one of which in the winter months is covered by a dome allowing tennis to be played all year round. It also hosts a tennis academy to support younger players and encourage them to take part in LTA competitions.

In November 2011, behind the Festival Theatre, local community group 'Transition Chichester' planted a community orchard with trees of old fruit varieties. Subsequently they created a community garden near the College Lane entrance.

More recently, from around 2012, the 'Falcons' soft ball team has played in the park in the summer months and competes in the Solent Softball League.

In 2013, while Chichester Festival Theatre was undergoing its conservation programme, plays were performed in the 'theatre in the park', a purpose-built tented structure holding 1400 seats

Oaklands Park has developed from farmland into a vital park for the city.