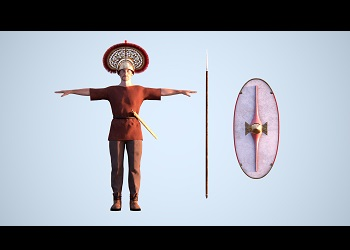 The spectacular weaponry that was found in the Mystery Warrior's grave indicate he would have been a magnificent and intimidating figure. In order to try to show the full visual impact, the museum team commissioned a digital heritage specialist to create a photo-real visualisation showing an artistic representation of this extraordinary man and his weaponry. Using the archaeological evidence, contemporary sources, and advice from a team of world renowned experts, Grant Cox of ArtasMedia has created the digital image that we have used within our exhibition and marketing campaign.

The Mystery Warrior was created using the same commercial software (3DS Max and Vray) that is used for both video games and visual effects in films and television. Geometry (basic shapes) were created and modified to block out parts of the helmet using references from the primary archaeological data. To these, materials were applied that describe to the computer how the exterior look should appear (how shiny, how much bumpiness, how transparent something is). These materials were driven by either mathematical fractal calculations to create patterns found frequently in nature, that can be applied and varied across a large surface, or through photography and image references in order to achieve a very specific detail, such as the patterning on the rim of the helmet.

To create hair on the model, a plugin called Ornatrix was used. This allows for the procedural (a word to describe something that follows a series of rules) creation of millions of strands of hair in a manageable way. The hair can be styled in multiple ways in a similar way that real hair might be (combed/cut/pushed around), or it can be told to follow forces such as gravity and wind. It can also work out from the underlying model how it should flow to follow the direction of the geometry and can interact with the model so that it does not penetrate the 'skin' that it sits on.

To rig the model, a skeleton was built that was used to drive the position and movements of the horse and warrior. Grant used a system called the 'Character Animation Theatre' inside of 3DS Max because it allows for flexibility in the way that animations and poses can be applied to 3D models. You can use layers to animate certain parts and then turn them on, or off, or you can create cyclical movements (such as walking for the horse) that can then be tweaked as the models are in motion to fine tune exactly how difficult parts of the figure bend, or move.

The final part of the process was rendering the shot. When a scene is committed to this, the computer compiles all of the information mentioned above and then works out using mathematical equations how things like reflections and lighting will appear from the specific angle that the camera is situated at. It is also possible to create common camera effects at this point such as depth of field, motion blur and glare. This all helps to provide the final result with more realism and creates something that the final viewer is more familiar to seeing on a daily basis. This process also allows for layers to be created that provide the final artist with a lot of control to be able to tweak elements like reflections, shadows & lighting in post production. The final shot was rendered at a 15,000 resolution, which not only provides a very large file in print, but also includes an incredible amount of detail from the models. Individual hairs, weave and fine scratches and deformation can be seen in the final image, which it is hoped helps to provide a beneficial and thought provoking output.

The incomplete preservation of his bones meant that full facial reconstruction was not possible. Instead we have drawn upon archaeological and literary evidence to piece together this artistic representation of the Mystery Warrior with his weaponry.

Why does the representation of the Mystery Warrior show him on horseback?

Evidence from the Mystery Warrior's bones tells us that he had many strong muscle and ligament attachments visible on his leg bones. This is consistent with horse riding, where a great deal of strain is placed on the legs as a result of gripping onto a horse or pony.

Iron Age horses were smaller than modern day horse breeds. They were more likely to have been around 13 hands and a size range of ponies between 11 and 13 hands is consistent with the evidence of horse remains from Iron Age sites throughout Europe. We have therefore chosen to represent the Mystery Warrior riding a pony rather than a horse.

Evidence for the type of horse harness used comes from a range of sources including objects such as the Gundestrup cauldron, and coinage such as the Verica cavalry duo. The harness fittings or phalera seen on this representation of the Mystery Warrior's horse emulate examples found on the continent from a period contemporary to the Mystery Warrior.

Why does the Mystery Warrior have blond hair, light coloured eyes, fair skin, and facial hair?

Classical sources describe the Gauls as having fair hair and light coloured skin. The below quote comes from Diodorus Siculus, an ancient Greek historian, writing in circa 60 BC - 30 BC.

The Gauls are tall of body, with rippling muscles, and white of skin, and their hair is blond,
and not only naturally so, but they make it their practice to increase the distinguishing
colour by which nature has given it. For they are always washing their hair in limewater,
and they pull it back from their forehead to the top of the head and back to the nape of the
neck... Some of them shave their beards, but others let it grow a little; and the nobles shave
their cheeks, but they let the moustache grow until it covers the mouth
DIODORUS SICULUS; BIBLIOTHECA HISTORICA; 4.5.38, 60 BC - 30 BC

In the 4th Century AD Ammianus Marcellinus, a Roman soldier and historian wrote:

Almost all the Gauls are of tall stature, fair and ruddy, terrible for the fierceness of their eyes.

Why does the helmet have a plume and why have we chosen red horse hair?

Helmet crests are commonly depicted on a range of objects, in paintings, sculptures and architecture predating the Mystery Warrior. Although no organics were found to confirm the presence of a plume, the u-shaped mount running along the top of the openwork suggests that such a plume would have been present. This is likely to have been either fur, hair or feathers. We have opted to show the effect of dyed horse-hair as one of the most striking possibilities, based on the evidence that he was a horse-rider. Other possibilities could include boar-bristle (as a celebrated fearsome wild species) or even a plume of chicken-feathers (evoking the fighting cock: still a powerful symbol of Gallic martial prowess). The colour red was chosen as the martial colour, associated with fighting and warfare.

How have we decided on the colour and pattern of his clothing?

The colours and patterns chosen for the clothing for the Mystery Warrior in this representation are known to have been achievable using Iron Age techniques and materials. Evidence for this comes from the Hallstatt textiles. Since 1849 more than 565 textile fragments have been excavated at Hallstatt in Upper Austria. These textiles date from the early Iron Age and even the Bronze Age.

How was the shape and style of the shield chosen?

The shape and style of the shield chosen in this representation is inspired by both archaeological evidence, such as the partial wooden remains of a shield from La Tene, France which dates to the 3rd Century BC, as well as the numerous depictions of shields on sculptures, buildings and other objects contemporary to the Mystery Warrior.

We opted not to include decoration on the shield and have instead given the shield a light white finish over the underlying woodgrain effect in order to not to detract from the detail of the shield boss.